The impetus for Tolkien’s writing career lies in the incredible suffering he experienced and witnessed in the trenches in World War I. On his return from France, he began to write; in writing The Hobbit, he “created a mythology for England” (Carpenter 100). His intent was to “make a body of … connected legend, ranging from the large and cosmogonic to the level of romantic fairy-story…which [he] would dedicate simply: to England; to [his] country” (Carpenter 101). However, his entire life up to this point helped him to create and put flesh on the bones of this body. His early interest in language and his need to give his language a history and genealogy, coupled with his love of calligraphy, drawing, and poetry, work together to imbue The Hobbit with depth and substance. We don’t need to travel to this world. Through his words and maps, he draws us in and we are there, living as inhabitants of The Hill.

Wilderland is conventionally oriented with north at the top of the map. We see rivers, roads, walking paths, access points, mountains, and directional signs. Tolkien, the cartographer, notes in detail the treacherous areas of Mirkwood (spiders, ElvenKing’s Halls) and the safe places (Rivendell, Beorn’s home). With this map, the reader can orient herself to the landscape, become aware of the dangers, and prepare for the journey.

However, Thror’s Map draws the reader in to the adventure. Now, we become part of the quest and hunch over the table along with the dwarves as Gandalf commands, “‘[L]et’s have a little light on this!’” (Tolkien 18). We join the secret circle and pore over the map as Tolkien describes the intimate and exclusive setting: “On the table in the light of a big lamp with a red shade he spread a piece of parchment rather like a map” (Tolkien 18). Thror’s Map is a mysterious treasure map and therefore must be deciphered.  East is at the top of the map “as usual in dwarf-maps” (Tolkien frontispiece 2). The finger on the left side of the map beckons us and points to the clue. We must use our knowledge of Anglo/Saxon Runes to translate the symbols into English. So begins our journey with Mr. Bilbo Baggins.

[For a complete and thorough discussion of the Hobbit maps, please go here. Mr. Tam does a monumental job of unravelling the mystery and deciphering the Hobbit maps: I stand in awe of his analysis and only wish I had the time and word count to delve into the study of maps as he does.] 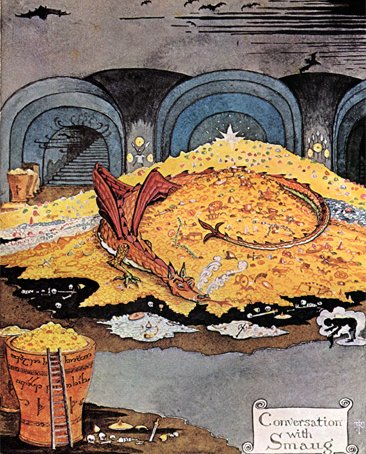 Wit, language, reason, and intelligence are important, and these tools become powerful weapons in Mr. Bilbo Baggins’ arsenal (along with his invisibility cloak) as he fends off the Gollum [click on Gollum to hear Tolkien’s voice], Spiders, and Smaug.  He uses his wits to evade capture by the Trolls and learns that Gandalf is employing the ventriloquist’s trick of throwing his voice and mimicking other Trolls long enough to expose them to the light of dawn and death. He uses language in the form of riddles and the gambit of talking to himself to trick Gollum. He incenses the Spiders by using bad language, calling them names, and hurling insults at them. Being somewhat knowledgeable in dragon-lore, he uses all of the tools in his mental toolkit, including reason and intelligence, to deal with Smaug. Bilbo by turns flatters Smaug, speaks in riddles, and evades the truth for “[t]his is the way to talk to dragons, if you don’t want to reveal your proper name (which is wise), and don’t want to infuriate them by a flat refusal (which is also very wise). No dragon can resist the fascination of riddling talk and of wasting time trying to understand it” (Tolkien 206).

As a hobbit, Mr. Baggins is an unlikely fictional hero. He loves his home and his simple, uncomplicated life. In short, he is unadventurous. Tolkien admits that he himself is very hobbit-like in his manner and character: “I am in fact a hobbit…in all but size….I do not travel much” (Carpenter 197). Daphne Kutzer declares that the hobbits “are close relatives to simple English folk who love their villages, their pubs, and their gardens, and don’t really pay much mind to outside worlds unless they encroach upon their own comfortable lives” (Kutzer, 130). Tolkien further suggests that “the hobbits represent the combination of small imagination with great courage which (as Tolkien had seen in the trenches during the First World War) often led to survival against all chances” (Carpenter 197).  In describing the enemy goblins, Tolkien advises that “they invented some of the machines that have since troubled the world, especially the ingenious devices for killing large numbers of people at once” (Tolkien 58). This is an apt comparison to World War I, where mass death was inflicted by mass production tools—the very tools that made life modern (Humphreys Lecture, June 21).  Although Britain won the Great War, many lives were lost in the battle. At the same time, Britons were losing empire. Kutzer says, “As the empire began to shrink, the language of nationalism and patriotism became more pronounced” (Kutzer xx). The Hobbit provides a positive view of a community who fight a great battle, win, and maintain their home and country. Through Bilbo Baggins’ quest for treasure, Tolkien gives his country a sense of national pride and a feeling of nostalgia for a rural life, a simpler lifestyle, and lost empire.

5 thoughts on “Wilderland and Thror’s Map”